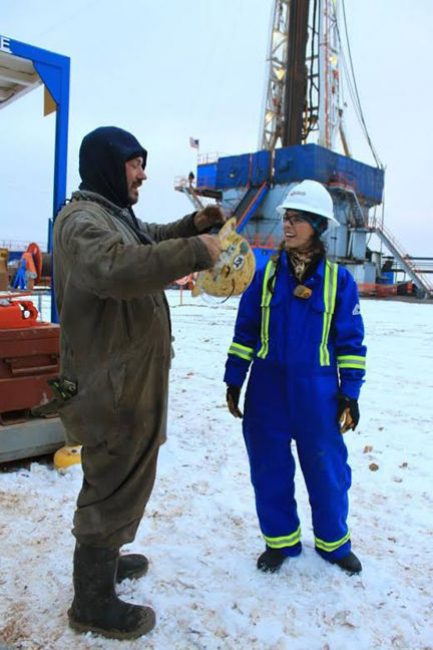 Before spending a few days in the Bakken’s oilfields this week, Miss Montana USA Tahnee Peppenger heard many negative stories about the area. Rumors of high crime, unsafe practices, wild west cowboys and not being environmentally friendly were among the tales.

Because of conversations with friends who work in the oilfield, the Great Falls native didn’t believe those stories. “I wanted to get a first-hand look. I just basically wanted to put my eyes to it,” she told the Sidney Herald this week. The result? “I was surprised that all the myths were substantially debunked,” Peppenger said. “Knowledge is power.”

Thanks to being sponsored by the Montana Petroleum Association, Miss Montana USA was able to enjoy an up-close look of the oilfield. Accompanied by Jessica Sena, communications director for the Montana Petroleum Association, Peppenger rode with a pumper from Northern Oilfield Services, spent time at a drilling rig owned by Patterson about five miles east of Bainville, toured a fracking site of Oasis Petroleum in Williston, N.D. and even attended a 6 a.m. safety meeting by Northern Oilfield Services.

“It was so far from the outrageous things I heard. It was a pleasant surprise,” Peppenger noted. “For any question I had, people were forthright. They were mystified why two young ladies in the oilfield were so curious.”

One of the highlights was Peppenger, wearing a harness, climbing a 90-foot high Derrick at an oil rig. “I made it about 50 feet,” she said. She couldn’t use an assisted lift though because she doesn’t weigh enough, but she wasn’t afraid at all. “It was more exhilarating than anything else.”

Sena said the Montana Petroleum Association wanted Miss Montana USA to experience what the oilfield offers. “I had no doubt in my mind that she would see a positive environment,” Sena noted.

After touring the Bakken oilfields, Peppenger said that without a doubt safety is a priority. “Safety was extremely expressed the entire day,” she noted.

Measures to be friendly to the environment were also seen. “The guys were no way going to be doing things to damage the earth,” Peppenger said. “It was a great experience for me to get first-hand information from the people who are working here on a daily basis.”

She explained that central Montana residents care deeply what is happening in the Bakken. “Why? A lot of our guys head to the oilfield to make a living,” she said. “In Great Falls, we’re definitely a positive advocate for it.”

Peppenger was crowned Miss Montana USA during the pageant in Missoula on Sept. 7, 2013. The Montana State University graduate is the owner and designer of a rodeo fashion design company, “PinkSpurs & Co. Her platform at Miss Montana USA deals with better treatment for veterans.

After her time as a crown holder, it won’t be surprising if Peppenger returns to the Bakken region.

“I want a piece of the pie,” Peppenger said of the oilfields. “There are so many good people out here.”

She noted anybody can be successful in the Bakken if they are willing to work hard.

“I sure came out of this experience with a great deal of respect for the people out here,” Peppenger added.