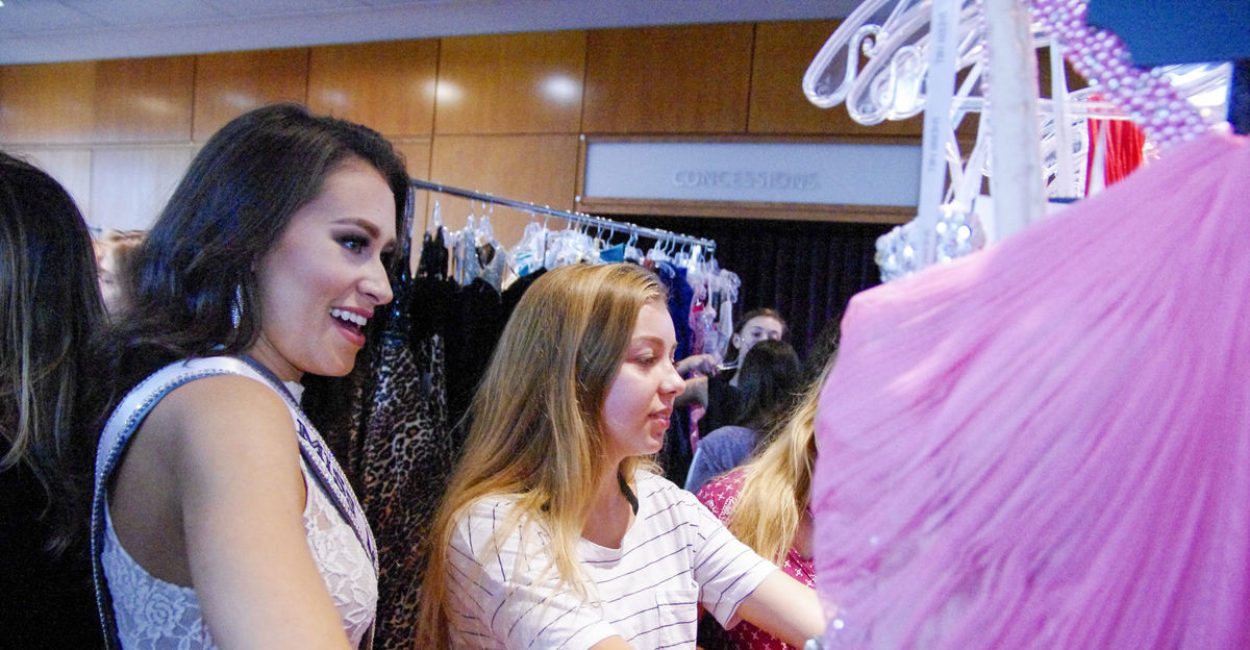 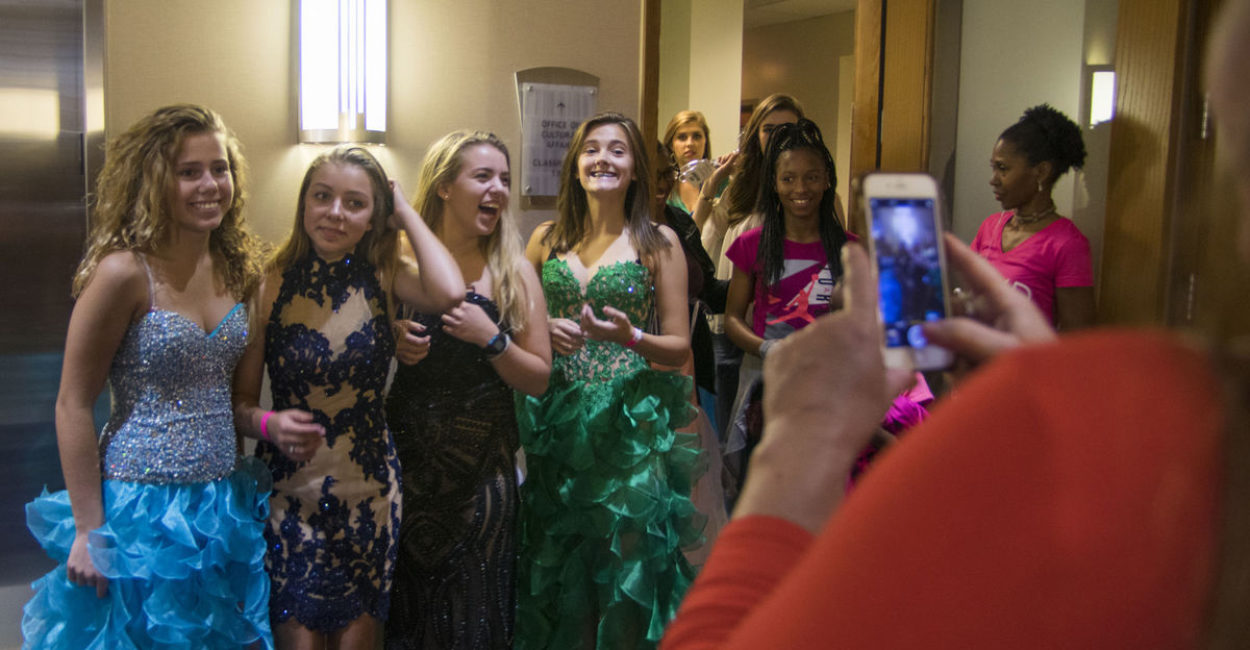 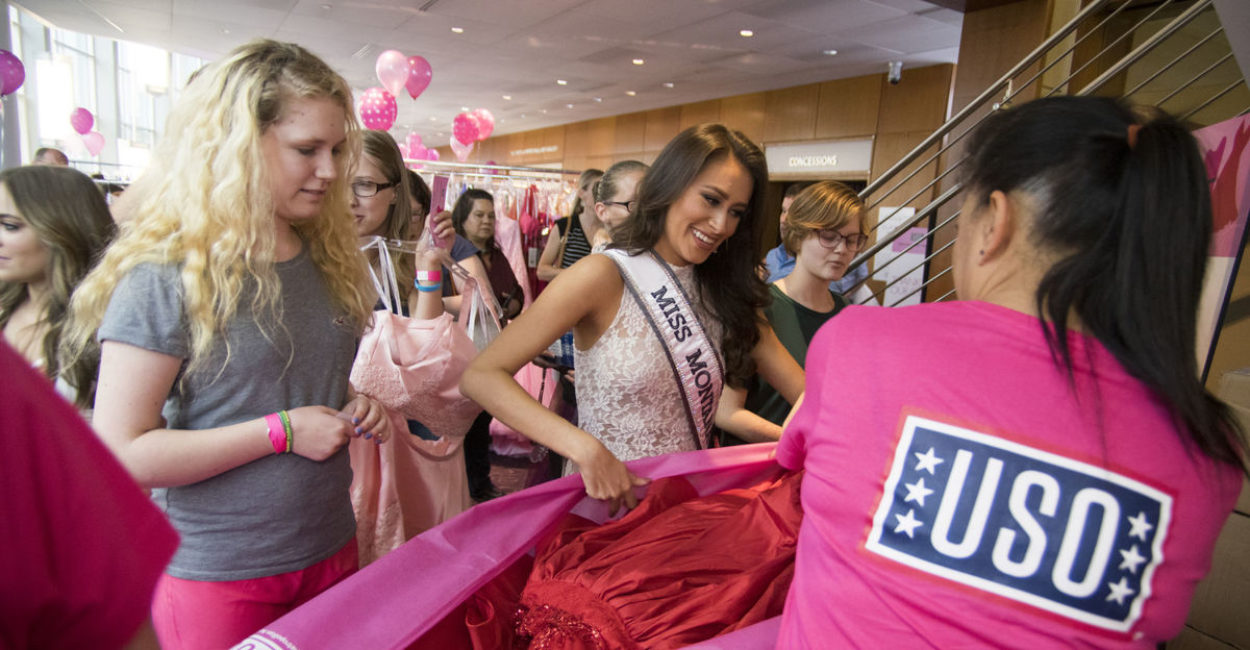 “Oooh, look at this one. Do you like it? How about a leopard print?”

Bridget Breden was having as much fun as her two teenage daughters as they searched for the perfect prom dresses Saturday afternoon.

“Mom, you’re insane,” 15-year-old Alexia Breden said with a laugh as she watched her mother toss another long, flowing chiffon gown across the pile already folded over her arm.

Alexia and her sister, Sadira Glass, were among nearly 700 teenage daughters of military personnel who came to the Sandler Center for a day of pampering, gifts and — best of all — a free gown from Sherri Hill: the designer known as the prom dress queen.

It was all part of an “Operation That’s My Dress” event hosted by the USO. There have been 21 so far across the country, but this was the first in Hampton Roads.

The event got started about five years ago when Hill, the designer, donated $500,000 worth of dresses to the USO. The organization came up with the idea to give them to daughters of military members.

But instead of just having the girls come pick out a dress, the organizers decided to turn it into a full princess experience by adding hair styling, makeup applications and free jewelry. Recently, they added a wellness component.

“We wanted to make it an event, not just dresses on a rack,” said Ray Kennedy, vice president of programs and services with USO Metropolitan New York. “We wanted to do everything that we could think of to make them feel special.”

To date, Hill, whose husband is in the military, has donated $8 million worth of new dresses to the program.

Saturday’s event started with a performance by a USO show troupe, then a fashion show in which contestants for the 2018 Miss USA pageant modeled dozens of the gowns the teens would be choosing from afterwards. Among the models was 2017 Miss USA Kara McCullough, a military daughter who grew up in Virginia Beach.

After the show, the girls headed to the second floor to choose a dress. Helping them make their selections were the pageant contestants, who offered suggestions on what styles might work best.

There was no shortage of options for the girls to choose from: strapless, backless, long, short, short in the front and long in the back, form-fitting, full-skirted, beaded, floral, ruffled, fringed, two-piece, halter top, mermaid-style, and off the shoulder. Sizes ranged from 00 to 26.

While there were no price tags on them, the dresses normally would cost anywhere from $550 to $2,500 each, Kennedy said.

Once they said “yes” to a dress, the girls got their hair styled by cosmetology students from the Rudy and Kelly Academy in Virginia Beach. After that, there was makeup application and tips from a team of artists from Mary Kay, and a chance to pick out free jewelry from the Jewelry Television network. Each girl left with goody bags full of cosmetics and hair products.

Francisco Bartalome, a member of the Coast Guard, beamed as he watched his 15-year-old daughter, Elaina, scour the racks before deciding on a gown with a pink, beaded top and with a long, flowing chiffon skirt.