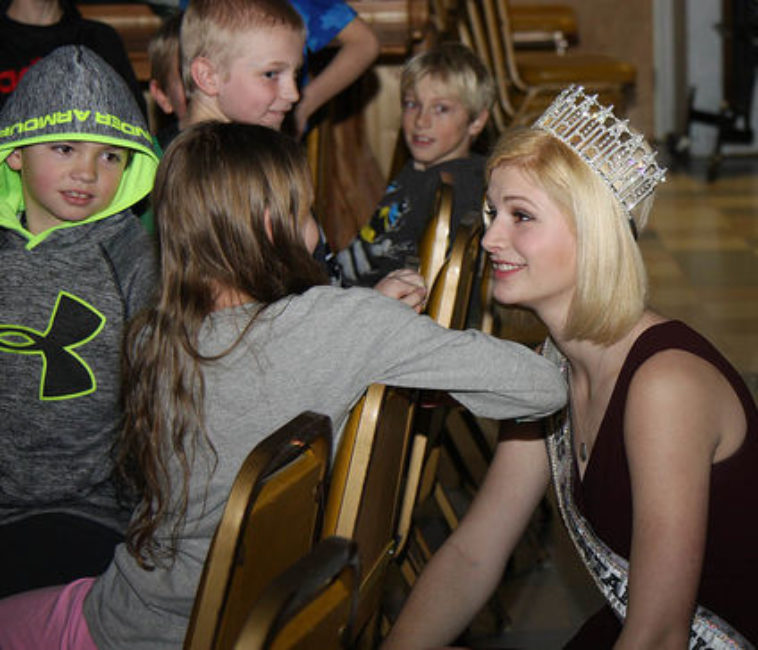 Brook Bezanson told Seeley Lake Elementary (SLE) students she was called stupid and lazy as a child because she had dyslexia and learning was difficult for her. She said in high school a lot of people called her Goth because she liked wearing black. This year however, the whole world calls her Miss Montana.

On Jan. 23, Bezanson came to SLE to tell students, “What you believe is what you achieve.”

Bezanson points to herself as a prime example. She said a year or two ago she never wore a dress or put on makeup. Jeans and a baggy sweatshirt were more her style. She did not consider herself the pageant girl type.

Asked why she decided to try out for Miss Montana, Bezanson said, “I had attended the Miss Montana pageant a couple of times to watch my cousin. I saw all those girls on stage and I thought, I can do that. That’d be easy.”

Bezanson said she soon found it wasn’t easy for her at all. Among other things, she had to learn to put on makeup, how to walk in high heels and how to manage interviews. She said one of the reasons she entered the pageant was because she wanted to have more confidence in herself. She went through with it and tried her best – and won her first pageant ever. She said the judges called her “a breath of fresh air.”

Part of Bezanson’s duties as Miss Montana include going to schools and talking to students. She said she’s happy to do that because she doesn’t want any child to feel like she did going through school. She wants everyone to know that dyslexia does not affect intelligence and that each person has to focus on their own gifts and find what makes them unique. She learned that she was really good at sports and played high school varsity volleyball and varsity golf, helping her team to the 2015 Class B Golf Championship.

Bezanson told the students her father Ed Bezanson built the Double Arrow golf course and she has played golf there ever since she was a child. She grew up in Seeley Lake and started school at SLE. When she was in second grade the family moved to Missoula where she attended St. Joseph Elementary School and then Loyola Sacred Heart High School. The family still owns a house in Seeley Lake and returns often to, among other things, golf on the Double Arrow course. 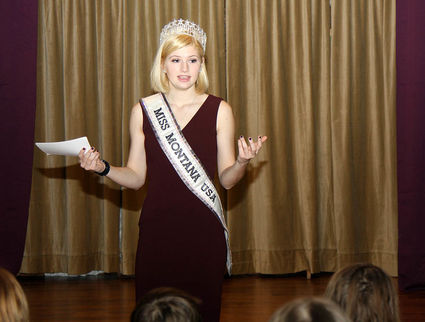 Miss Montana 2017 Brook Bezanson told Seeley Lake Elementary students to find what makes them unique and to believe in themselves.

Besides sports, Bezanson found her other unique gift was art and drawing. Her dream is to one day become a director of animated films. She is currently a second-year student at the University of Montana working toward a degree in media arts.

Asked how she feels about wearing dresses and heels now, Bezanson said she really enjoys it and is looking forward to the Miss USA Pageant. No Miss Montana has ever won Miss USA and the last time a Miss Montana placed as one of the top 15 USA contestants was in 1958. Bezanson said her goal is to at least place in the top 15. Should she be crowned Miss USA , she would then progress to compete in the Miss Universe Pageant.

Whatever happens at the pageants, Bezanson said she will be bolstered by her personal motto: Stay optimistic, no matter what happens.